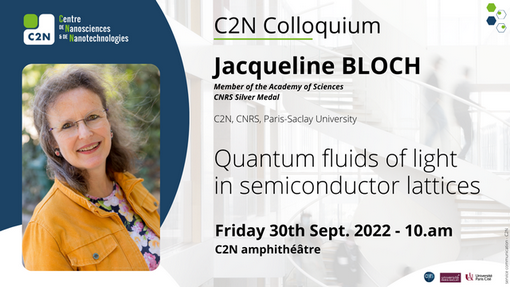 When confining photons in semiconductor lattices, it is possible to deeply modify their physical properties.

Photons can behave as finite or even infinite mass particles, photons can propagate along edge states without back scattering, photons can become superfluid, photons can behave as interacting particles. These are just a few examples of properties that can be imprinted into fluids of light in semiconductor lattices. Such manipulation of light present not only potential for applications in photonics, but also great promise for fundamental studies. One can invent artificial media with exotic physical properties at the single particle level or even more interestingly when interactions are considered

Jacqueline Bloch is an experimental physicist, expert in non-linear and quantum optics in semiconductors. After a PhD on semiconductor quantum wires, she started a research program at CNRS on semiconductor microcavities. She has always been convinced that the physics of quantum fluids of light is particularly rich, in particular when taking full advantage of the technological tools available at the Center for Nanoscience and Nanotechnology. Along her carrier, she has explored a variety of physical phenomena, like superfluidity, solitons, flat bands, topology, phase transitions or analog black holes.

Jacqueline Bloch is today Research Director at CNRS, Professeure Chargée de Cours at Ecole Polytechnique and member of the French Academy of Science. She was awarded the 2015 Jean Ricard prize of the French Physical Society, the 2017 CNRS Silver Medal and the 2019 Ampère prize.